Wasted Youth – Get it NOW! 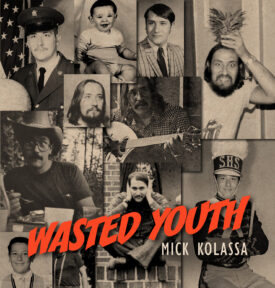 Mick Kolassa has once again teamed up with Jeff Jensen to put together a package of fun. Following the critically acclaimed If You Can’t Be Good, Wasted Youth, is a collection of a dozen tracks with 14 songs, 11 of which are Kolassa originals. The Covid year of 2020, during which Mick lost his wife and several friends, inspired many of the songs on this album.

Stories Behind the Songs

Throwing Away These Blues (Kolassa) 2:27
2020 was a tough year, and I found it easy to feel sorry for myself (as another song will attest), but I’ve never been down for long, I seem to be almost immune to depression, and I hated the feeling. So regardless of how hard than damned year hit me, I knew I needed to move past it, and this song talks about that, it celebrates leaving bad times behind

Wasted Youth (Kolassa) 4:50
I started working on this song a couple years ago, when I was feeling less healthy and more worn down by my years. It is a song about growing older and understanding that our days are limited and realizing that I didn’t realize that years ago. I figured that a lot of blues fans would identify with the song! This track has 3 electric guitars on it, with Jeff Jensen and me paying what could be called a “call and response” as he plays a response to my initial line. Brad Webb adds his slide guitar superpowers to this song and Eric Hughes added his harp to the tune, making this 10 straight albums on which Eric joins me in making music!

It Hurts to Let You Go (Kolassa) 5:58
I wrote this song as a way to prepare myself for the loss of my wife, which I knew was coming soon – but I wanted it to be more general than just my story, I wanted to write it for anyone who is dealing with the loss of someone close to them

I’m Missing You (Kolassa) 3:47
I have an imaginary muse and I write love songs to her often – it seems to be the safe way to go! I wanted it to be funky and celebratory, telling of missing my love while being content to have her. Missing her but secure in her love. Musically I wanted the bass to dominate this song – and I think Bill Ruffino pulled that off!

Easy Doesn’t Live Here (Kolassa) 3:22
Relationships are tough, and to make them work you need to understand that, to accept that love isn’t all cake and cookies. But if love is real, and strong, adversity doesn’t really mean anything! I wanted this song to sound and feel different from others on the album, so I leaned in a Latin direction when composing it and asked the wonderful young guitarist David Julia to add some of his magic to it.

I Can’t Get Enough (Kolassa) 2:57
Another love song to my imaginary muse, meant to be slightly humorous but lots of fun. I asked my friend Anthony Paule to play guitar on this, and he captured the spirit of it beautifully. Marc Franklin (trumpet) and Kirk Smothers (sax) kept that fun spirit going as they rounded the song out.

Feeling Sorry for Myself (Kolassa) 3:04
Despite my regular upbeat attitude and apparent immunity to actual depression, I do get down sometimes and, as 2020 drag on and ever downward, I just let the “feeling down” take me down a bit further. Because I can’t let a good emotion just disappear, I memorialized my own slip into minor depression in this song. I wanted it to feel a bit like a Ray Charles song – Ray would smile through a sad song, and I love that. My good friend Victor Wainwright helped it to sound a little more like Ray!

Touching Bass (Kolassa) 3:23
This song came about as I was simply messing around with a bass guitar, walking around a 12 bar song. Playing with the fact that Bass and Base are homonyms I just started playing with the idea of a bass driven song about touching base

Darkness To Light (War, Young, Traditional) 5:27
I have always wanted to cover Slipping Into Darkness. War’s album The World is a Ghetto is one of my all-time favorites. And this song always just grabs me. I started playing around with it and I just naturally started leaning it toward a reggae feel – which isn’t that far from the original. While playing it the Youngbloods song Darkness Darkness came to mind – it had the same feel and “tone (both songs seem to be about addiction and desperation) and even have similar musical underpinnings (very similar chords) to transition from one to the other. While messing around with variations it struck me that the old spiritual, Wayfaring Stranger, was also similar musically and could be fit into the mix. The combination turns out to tell a story of addiction, despair, death and eventual salvation and reunion with love. That’s why the medley is called Darkness to Light

My Mind Doesn’t Wander (Kolassa) 3:11
Another love song, courtesy of my imaginary muse. I wanted to take this song a step or two away from a traditional blues or rock form (1-4-5 in music speak) but not too far. I asked my longtime friend Brandon Santini to join us on this song because I knew his harp tone could take the song somewhere special – and it sure did.

Pieces of My Past (Kolassa) 6:17
This song is my attempt to say goodbye and good riddance to 2020. When my wife passed away I decided to move away from Mississippi, but not too far – I moved to Memphis! I moved into a much smaller house, which necessitated getting rid of a lot of things, some of which I (we) had carted around for decades. As I downsized – significantly – it occurred to me that I was literally throwing away pieces of my past, which inspired the song.

Edge of a Razor (Kolassa) 3:06
I began writing this song about a dear friend who works harder than anyone else I know, a single mother who stretches herself thin to hold things together and make sure her children secure. Watching her let some things that would be nice for her pass by as she focused on the kids, it struck me that it’s a tenuous situation, living on the edge of a razor. As the song developed and I wrote the verses I came to understand that I was writing this song about hundreds of brave and strong women who have fought through similar challenges. Musically this song consists of my voice and three acoustic guitars, each played in a different manner. I finger-picked the chords of the song and played the bassline with my thumb (channeling my inner folkie) and Jeff Jensen strummed the same chords too give them depth. I asked my friend Albert Castiglia to add a guitar to it, and he provided the perfect complement by playing an acoustic slide guitar. I believe that we each felt the emotion of the song, as each has daughters of our own and understand the reality of the song. Honestly, this song fills me with pride.