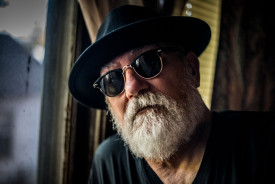 “Michissippi Mick” Kolassa lives in Memphis but was born in Michigan and lived in Mississippi for nearly 30 years, where he was given his nickname.   He has played blues in solo and duo acoustic formats and with his bands for years.  Mick has performed in legendary blues venues such as Ground Zero, The Rum Boogie Café, Biscuits and Blues, Martha’s Midway Tavern, The Bradfordville Blues Club, Darwin’s, Blind Willie’s, Underground 119, The Capitol Oyster Bar, the National Blues Museum, and many more.  He has also performed at multiple blues festivals in North America and Europe.

Each of Mick’s albums has received significant airplay and radio chart positions and they all included different styles of blues.  Rather than staying within a single genre of blues, Mick loves and celebrates all styles of blues, and also loves to find the blues hidden in songs of other genres, “bluesifying” songs and doing what he calls “uncovers”.  Mick can offer 4 different “flavors” of blues to an audience:

Regardless of the venue and configuration, Mick delivers lively and animated performances, assuring that the fans enjoy themselves as they listen to him playing his Free-Range Blues©.

The Blues Foundation is Memphis-based, but world-renown as THE organization dedicated to preserving our blues music history, celebrating recording and performance excellence, supporting blues education and ensuring the future of this uniquely American art form.

The Blues Foundation is a non-profit 501(c)3 organization that works to support the blues and the blues community in many ways. The Foundation holds several regular events to celebrate the blues and recognize excellence in blues through the Blues Music Awards, the International Blues Challenge, Keeping the Blues Alive Awards and the annual induction of individuals and their works into the Blues Hall of Fame. The Blues Foundation also provides or sponsors programs on blues education, including Blues in the Schools and Generation Blues, and in health care for blues artists through Sound Healthcare and the HART Fund. MORE INFO ->

All Proceeds from my albums will go to support two of these important programs: The HART Fund and Generation Blues.

THE HART FUND (Handy Artists Relief Trust) is for Blues musicians and their families in financial need due to a broad range of health concerns. The Fund provides for acute, chronic and preventive medical and dental care as well as funeral and burial expenses. MORE INFO ->