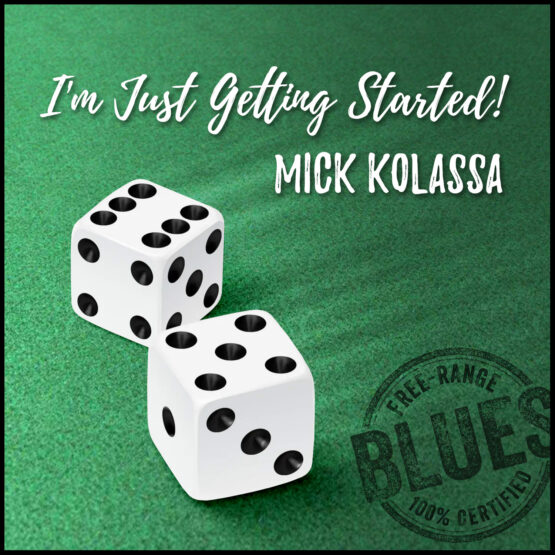 With his 11th album Mick Kolassa declares, I’m Just Getting Started, and what a start. Roaming through his “Free Range Blues” Mick serves up several subgenres of blues. Working again with producer Jeff Jensen, they have assembled a cadre of seasoned musicians to bring you a selections of ear opening tunes. Opening with the title track, “I’m Just Getting Started”, Mick declares that he’s got moves ain’t nobody seen yet. In the second track Mick steps away from the classic blues and brings you a Soul blues tune called “What Can I Do?” that features some stellar lead guitar work by Dexter Allen, who also played bass on ten of the tracks on this album.

Mick then asks listeners to dream “Bigger Dreams” and not give up on the ones they have. Mick and the band move in the direction of jazz with their cover of “Alibis and Lies”, a song about modern day Beale Street originally done by Chainsaw Dupont. Joining Mick on his version of the Taj Mahal classic “Leaving Truck” is Brandon Santini – this is the first song Mick and Brandon ever played together, many years ago, and they bring it with a new and funky groove. Brandon also joined Mick in presenting their take on the John Hiatt tune “Real Man”. The other cover on this album is a very bluesy/roots gospel take on the Pacific Gas and Electric rock classic “Are You Ready”.

The love songs “That Kind of Man” and “Take Me Away” are presented with a mixture of Soul and blues rock, while “Trying Not to Let the Darkness In” is one of Mick’s classic minor key slow blues songs. Closing out this new album are “Hard Hearted Woman”, a tune about a lady who should be avoided, to say the least, and “How Much Can I Pay You?” a comical song about a patron at a club who gets more than a little carried away with her celebrating.

All combined, these songs represent an expansion of the Free Range Blues Mick is noted for, and he’s just getting started!