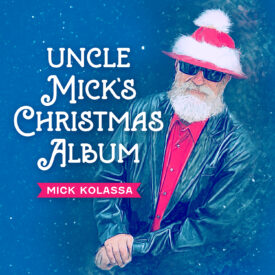 Unheralded bluesman Mick Kolassa, who lived for three decades in Mississippi before relocating to Memphis, makes good albums on a regular basis. His first Xmas one is better than good; it has the stuff to become a minor classic. Inventive makeovers of the usual Xmas picks and some strong original songs show the value of Kolassa’s slow-and-easy approach to singing lyrics. His weathered, imprecise voice aches with true-blue experience, even when he keeps a strong upper lip. The performance with its sharpest edge of emotion is his bittersweet tune “The Best Christmas Ever.”

Mick Kolassa has been rather prolific in producing blues recordings. His latest is a recording of Holiday favorites with a few originals. Once again, he has collaborated with guitarist Jeff Jensen for this recording. Mick brings his vocals and guitar along with that of Jensen. Others on this session are Bill Ruffino on bass, Rick Staff on keyboards, and James Cunningham on drums. Selected tracks include Eric Hughes on harmonica and Marc Franklin on trumpet, while Reba Russell and Susan Marshall add backing vocals.

Kolassa is a pleasant vocalist enough, but in the context of the songs here, he invests his grainy vocals with considerable charm, as implied by the album title referring to Uncle Mick. The performances are handsomely rendered, with Jensen contributing some first-rate guitar, with others adding memorable solos. One doesn’t expect to hear a bluesy cover of Mariah Carey’s “All I Want For Christmas Is You.” Then, Kolassa delights before a Caribbean-tinged rendition of “Frosty the Snowman,” whose highlights include Franklin’s trumpet solo and Hughes’ harmonica embellishments. With a lazy-sounding backing, Kotassa sings about his love being there, making it “The Best Christmas Ever.”

Kotassa’s laid-back vocal provides just the right mood for a cover of “Merry Christmas Baby.” Jensen is especially outstanding here. “Jingle Bells” sounds like a new song with Jensen’s trebly guitar and a lazy funk groove followed by the light musical setting for “Winter Wonderland.” Franklin’s trumpet adds atmosphere to the genial delivery of “Have Yourself a Merry Little Christmas.” At the same time, Kotassa sings more forcefully on “Christmas Morning Blues,” where his love has gone, taken the presents he bought for her, but she bought him none. It is a vibrant Chicago blues shuffle with Hughes adding a harp solo.

The closing track is “Beale Street Christmas Jam,” with all the band members fitting a classic Christmas song into this instrumental shuffle. It is a spirited close to a toe-tapping collection of bluesy Christmas songs sure to warm the Holiday spirits Ron Weinstock – Issue 399

When Mick Kolassa recorded Uncle Mick’s Christmas Album (Endless Blues Records) in Memphis, the temperature hovered around 95˚. If you live in the south and you plan to release a Christmas album, you are going to be recording it in less than frigid conditions. That’s perfectly fine in this case, because this may be one of the coolest Christmas albums you’ve heard in a while. Kolassa and company (Jeff Jensen – guitar, Bill Ruffino – bass, Rick Steff – keys, James Cunningham – drums, Eric Hughes – harmonica, Mark Franklin – trumpet, and Reba Russell and Susan Marshall – backing vocals) give this album a greasy, soulful yuletide feel. There are a lot of familiar tunes present, but unlike you’ve ever heard them before.

Opening with Mariah Carey’s “All I Want For Christmas Is You,” Kolassa effectively delivers it as a soulful, slow blues tune. Next is a fantastic take on “Frosty the Snowman” that marries Memphis to New Orleans in a way that will have toes tapping and heads bobbing. Kolassa contributes a few original songs among the nine tracks, the first of which is the deliciously funky, slightly spicy “The Best Christmas Ever,” which is followed by a wonderful read of the blues classic “Merry Christmas Baby,” which features some superb guitar work.

Three traditional Christmas tunes follow: ”Jingle Bells,” “Winter Wonderland,” and “Have Yourself a Merry Little Christmas.” While none of these are usually considered to be “blues” tunes, Kolassa puts a very bluesy spin on all three songs. “Jingle Bells” has a old school, almost dangerous rock ‘n’ roll feel, “Winter Wonderland” strikes a loose-limbed, carefree groove, and “Have Yourself a Merry Little Christmas” is a nice, warm R&B track that features Jensen on guitar, Franklin on trumpet, and Steff on a variety of instruments.

The last two tracks are originals. First is Kolassa’s rip-roaring blues rocker “Christmas Morning Blues,” where he wakes up to a house missing his lover, his car, and his Christmas presents. The closer is a lot of fun, an instrumental called “Beale Street Christmas Jam,” where the band members take turns fitting classic Christmas songs into a 12-bar blues shuffle.

Uncle Mick’s Christmas Album has a pretty high spot in my list of Favorite Yuletide Albums. Chances are pretty good that it will occupy a high spot on yours, too. Check it out. ~ Blues Bytes

I just had the opportunity to review the most recent release, Uncle Mick’s Christmas Album, by Mick Kolassa, and it’s quite entertaining. Opening with Mariah Carey’s, All I Want For Christmas, and I think its a real solid cover. Never been crazy about pop music and Kolassa’s slow bluesy approach with Jeff Jensen on lead guitar, Bill Ruffino on bass, Rick Steff on keys and James Cunningham on drums gives this track a new, fresher life. Original track, The Best Christmas Ever, is up next with a funky R&B approach. Kolassa on lead vocal and with warm backing vocals by Reba Russell and Susan Marshall over cool piano and organ work by Steff set a nice stage and pinched down guitar soloing by Jensen adds spice. Johnny Moore’s Merry Christmas Baby really gives Jensen a chance to show some real nice riffs both bluesy and jazzy making it one of my favorites on the release. Tom tom laden rhythm gives Jingle Bells and whole new face. Get far enough from the music that you can’t hear the words and I defy you to determine that it’s Jingle Bells. This swampy, Dr Joh like approach is really cool and again, Jensen’s guitar work adds real shine to the apple. Very nice. Wrapping the release is a Jensen/Kolassa original, Beale Street Christmas Jam, a hot shuffle ala Gatemouth Brown style. Jensen always has great riffs, and here he’s complimented by Marc Franklin on trumpet (solo), Cunningham on drums (solo), Ruffino on bass (solo), Eric Hughes on harmonica (solo). This track will get your foot tapping. Excellent closer. ~ Bman’s

It takes quite a bit for a Christmas album to get my attention…and even more for me to honestly like it.  Mick Kolassa has done all that, and more.  Uncle Mick’s Christmas Album is one of those things that I can see myself playing throughout the year.  Memphis Blues through and through, the album offers a fresh take on some holiday classics, and a trio of new tunes that capture the Christmas spirit.  Recorded in the 95-degree heat of a Memphis summer, the album features Mick, with some of the finest musicians Memphis has to offer, doing what they do best.  The result is upbeat, soulful, funky, and absolutely respectful of the genre.  Mariah Carey may strike a killer pose in her Santa suit, but Mick’s rendition of “All I Want For Christmas Is You” is, hands down, the best version of the tune I have heard to date.  That is followed by “Frosty The Snowman” with a bit of New Orleans flair.  Other classics include “Merry Christmas Baby”, “Jingle Bells”, “Winter Wonderland”, and “Have Yourself A Merry Little Christmas”.  The original tunes offer insight into what Christmas is all about.  “The Best Christmas Ever” is a funky and soulful love song, “Christmas Morning Blues” is a reminder that not all Christmases are merry, and “Beale Street Christmas Jam” gives each of the musicians to strut their stuff.  This album is sure to brighten your holiday season.  Merry Christmas to all.  – Bill Wilson

Mick Kolassa’s recently released holiday music collection, Uncle Mick’s Christmas Album is unquestionably one of the top titles in this year’s field of new holiday music records.  That is proven from beginning to end of the nearly 40-minute record through its unique originals and equally enjoyable covers.  Among the most notable of the originals featured in this record is its penultimate entry, ‘Christmas Morning Blues.’  This song is so fun in part because of its musical arrangement.  The musical arrangement is a clear Chicago-based blues sound.  The use of the harmonica and guitar immediately conjures thoughts of the best works of Junior Wells.  At the same time, there is no denying the influence of B.B. King here, especially in the combination of the guitar line, the sound of the drums (thanks to the production) and even Kolassa’s own vocals.  Kolassa’s vocals are so eerily similar to those of King through their tone and delivery style.  This even as the picture of Kolassa on the record’s cover makes him look like a cross between a bluesy Santa and a perfect fit as a member of ZZ Top. ~ MORE >>

Normally I don’t like Christmas albums much, but ‘Uncle Mick’s Christmas Album’ will certainly get quite a few spins at the end of the year. An absolute must to get through the Christmas season! MORE>>

Sure, the holiday is over and it’s time to take down the decorations. But why not listen to a good holiday blues album while you pull down the tinsel and box up the bulbs? Mick Kolassa has just the thing, Uncle Mick’s Christmas Album, featuring a mix of covers and original material, all with a great Memphis sound. Joining the vocalist and guitarist on this release are Jeff Jensen on guitar, Bill Ruffino on bass, Rick Steff on keyboards, James Cunningham on drums, Eric Hughes on harmonica, and Marc Franklin on trumpet, with Reba Russell and Susan Marshall on backing vocals. The arrangements are by Mick Kolassa and Jeff Jensen. ~ MORE >>