Free Range Blues
by Monte Adkison aka the “Blues Stalker” 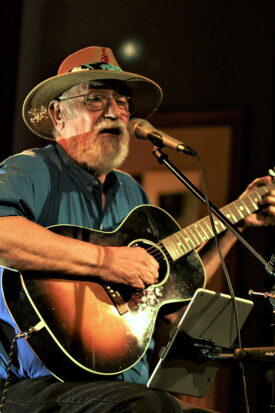 There are musicians that play the blues and there are bluesmen. Mick Kolassa, aka “Michissippi Mick” is indeed in the latter category and is the entire package. A genuine bluesman feels, as well as exhibits, a compassion, love and dedication to the musical genre -not to just play it to fulfill an ego trip on stage or to collect revenue but instead seeks to educate, embellish, devour, and immerse oneself in the love of the music and to share that joy with others. Born in Michigan, Mick Kolassa lived in Mississippi for three decades before recently locating to Memphis. For the past 50 years his history includes playing acoustic and electric guitar, being a prolific songwriter and storyteller, vocalist, blues scholar, blues advocate (former Board of Directors of the Blues Foundation), producer and head of Endless Blues Records, and overall hardcore blues fan. His debut CD in 2014, entitled “Michissippi Mick” was followed by an impressive discography of ten releases including a Christmas album in 2021 (“Uncle Mick’s Christmas Album”) that charted well and included a stellar group of 100% Memphis musicians. His 11th and newest release “I’m Just Getting Started” includes some of my favorite musicians- Jeff Jensen, Dexter Allen, Reba Russell, Bill Ruffino, and Brandon Santini, so this fan felt like she had hit Lotto when listening to it the first time. If this is Mick’s idea of him “just getting started”, then I need to stock up on flame retardant as he indicated that he has several more albums in the works… READ THE INTERVIEW HERE