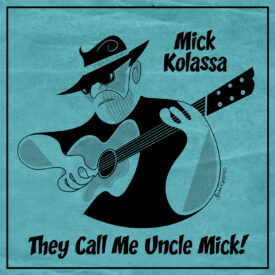 One of the busiest artists on the blues scene today, Memphis-based Mick Kolassa poured on the heat with the electrified I’m Just Getting Started last summer but returns to his acoustic roots in style with this follow-up, mixing six clever originals with five covers culled from other fields.

A Michigan native who’s released about a dozen CDs since walking away from his day job a decade ago, Kolassa’s definitely deserving of the Uncle Mick reference he uses in the title. Despite the seeming frown displayed on the cover, there’s plenty to smile about thanks to his warm voice, friendly delivery and skill as picker on the six-string.

Three of the biggest names in the industry – Bobby Rush, Doug MacLeod and Watermelon Slim – all make guest appearances here in a set captured by Pete Matthews and Toby Vest at High Low Recording in Memphis. Gospel and blues giant Dexter Allen provided extra help in the studio, and – as usual – Mick called on blues-rock powerhouse Jeff Jensen to serve as his co-producer.

Delivering what he terms “free-range blues,” Kolassa’s backed throughout by Jensen on guitar and percussion, Rick Steff on piano, Tom Leonardo on drums and Carl Caspersen on bass. Rush, Slim and Eric Hughes all contribute harmonica, Chris Gill and Brad Webb sit in on six-string and Alice Hasan (violin) and John Whittemore (vibraphone) lend a hand, too.

All of Mick’s originals are clever, down-to-earth and frequently humorous, and they dovetail perfectly with a cross-section of tunes that span the 20th century, beginning with a rendition of Bo Carter’s “My Pencil Won’t Write No More.” There’s a twinkle in his eye and a smile in his voice throughout the hokum classic. His work on the strings is sprightly, and Hughes’ mid-tune solo shines. Eric yields to Bobby on the reeds for the previously released original, “Wasted Youth,” which follows. An unhurried shuffle, it continues the theme of the opener as it states: “Why they gotta waste youth on the young?/They don’t know how good they got it, man, ‘til it’s already gone.”

John Prine’s country-folk pleaser, “Daddy’s Little Pumpkin,” takes on another dimension thanks to a reinterpretation as a percussive blues before MacLeod lays down tasty licks on “Used to Be,” a complaint about the current state of the post office, radio, reimagined restaurant menus and more. Up next, a cover of Hank Williams’ chart-topper, “I’m So Lonesome I Could Cry,” is head-and-shoulders the most interesting song yet, stripping away the classic country feel and replacing it with a bluesy, gypsy feel enhanced by Hasan’s exceptional work on fiddle.

MacLeod’s back on board for “My Woman She’s So Mean,” which describes a lady who’s highly troubling and evil, too. It precedes an uptempo take on Joni Mitchell’s paeon to “Woodstock” on which Kolassa shares the mic with Watermelon Slim who also adds a taste of Louisiana saxophone and “Why?” – and original complaint about a woman who bad-mouths others and seems able to love herself and no one else.

Things brighten instantly for a take of “(On the) Sunny Side of the Street,” the Broadway hit penned by Dorothy Fields and Jimmy McHugh in 1930. Two more originals — “Bless His Heart,” an uptempo tribute to a late friend Bubba, which features Steff, and “The Cheese Song,” a send-up honoring…you guessed it…cheese – bring the action to a close.

One of the most giving musicians in the blues world, Mick’s a former member of the board of the Blues Foundation and – as he’s done frequently in the past – he’s donating all of the net proceeds to two of its charities: the HART Fund, which provides support for musicians dealing with financial and/or health problems, and Generation Blues, a program that supports youngsters who’ll continue the music for future generations. Do yourself a favor by picking up this one. You’ll be doing a good deed, too! ~ Marty Gunther, Blues Blast

Mick Kolassa is one busy dude. I just reviewed his I’m Just Getting Started last month, and he’s already back with another one- must’ve recorded them at the same time.  They Call Me Uncle Mick is a return to Kolassa’s acoustic roots, with no amplified instruments used on any of the tracks- just Mick and his guys having a whole pile of fun.

As with his other records, The Call Me Uncle Mick is a likeable blend of originals and some very interesting covers.  Kolassa has made quite a hobby of uncovering songs that fit well into a blues form. He did it with The Beatles’ Help on his Blind Lemon Sessions disc, and he does it here with a startling version of Hank Williams’ I’m So Lonesome I Could Cry that might actually make you cry.  Other covers here include Joni Mitchell’s Woodstock (with a guest appearance by Watermelon Slim), John Prine’s Daddy’s Little Pumpkin, the old standard Sunny Side of The Street and Bo Carter’s 1931 gem My Pencil Won’t Write No More, which kicks off the album in fine style. At the other end he closes with a bit of fun called The Cheese Song.

As a singer Mick reminds me somewhat of Dr. John and the band as a whole swings with a natural ease, making TCMUM a blast to listen to.  With his producing partner Jeff Jensen Kolassa has assembled another true Free Range Blues Experience.  In a lot of ways it’s the opposite of the Orphan Jon album just reviewed but it’s just as valid a blues experience.  Wasted Youth is a remake of one of his own tunes and includes the legendary Bobby Rush on harmonica.  One of the best original songs on the album is the original My Woman She’s So Mean which will have some people saying “I think I know her” and others thinking “I used to live with her.”

The final word on They Call Me Uncle Mick is it’s a relaxed, jaunty and fun blues listening experience and, like his other albums, well produced to boot.  It sounds like everyone had a blast playing these songs, and you’ll find that as you listen some of that spirit will rub off on you too.  And as with his other albums, 100% of the net proceeds go to The Blues Foundation.   I’ll be playing this in the car on my way to work tomorrow, and I’ll walk in the door with a smile on my face because of it… you can’t beat that. ~ John Kereiff, The Rock Doctor

Mick Kolassa is undoubtedly one of the most prolific artists on the contemporary blues scene and only a few weeks after presenting his new electric album, “I’m Just Getting Started! », it is an entirely acoustic effort that he reveals this time with « They Call Me Uncle Mick », a disc for which he has once again brought together the gratin of Deep South musicians! Determined to do without any amplified instrument, the singer and guitarist invited his faithful accomplice Jeff Jensen on guitars and percussion, but also Rick Steff on piano, Carl Caspersen on bass, Tom Leonardo on drums, Eric Hughes on harmonicas and Alica Hasan on violin, also offering the presence of guests like Doug McLeod on guitars, Watermelon Slim on vocals and on harmonicas, Chris Gill and Brad Webb on slide, John Whittemore on vibraphone and, last but not least, Bobby Rush who places his harmonica on an acoustic re-reading of “Wasted Youth”, the tittle track of the album that Mick Kolassa came out a year ago. Elegant in his compositions, very precise in his covers, this bluesman with a very vast culture will offer us a great tour of the works of Bo Carter with “My Pencil Won’t Write No More”, John Prine with “Daddy’s Little Pumpkin “, Hank Williams with “I’m So Lonesome I Could Cry” or Joni Mitchell with “Woodstock”, but also a breathtaking version of the standard “Sunny Side Of The Street” and of course original pieces like “Used To Be” , “My Woman She’s So Mean”, “Why? » and « The Cheese Song », a piece in which he makes tribute to cheeses of all kinds. Totally devoted to the cause of a blues that he has anchored in the depths of his heart and soul, Mick Kolassa sings and plays with constant spontaneity but more than just an artist, he is also a human of incredible kindness and infinite generosity that we can meet on a daily basis in Memphis, whether in a concert hall where he goes to applaud his peers or in a club where he officiates as a judge during the ‘International Blues Challenge. And as for each of his albums, all profits from the sale of “They Call Me Uncle Mick” will be donated to the Blues Foundation to supply the funds intended for the health of musicians and the training of young people. Another reason to get two copies, including one to offer for example! (translated from French!) ~ ZiCaZic.com

TRANSLATION: Mick Kolassa is a very prolific musician who always surprises the audience with new and interesting works. On this occasion and after his previous album in electric format, Mick returns once again to acoustic blues in an album produced once again by Jeff Jensen where all the instruments are not amplified and in which he offers us a repertoire of eleven songs, six of them own compositions and the rest from artists such as Bo Carter, Johnny Prine, Joni Mitchell or McHugh & Fields.

Kolassa’s suggestive voice and guitar find the magnificent support of an excellent group of artists, all of them stubborn connoisseurs of the secrets of acoustic blues, such as Jeff Jensen on guitar and percussion, Brad Webb and Chris Gill on slide, Eric Hughes, Bobby Rush and Watermelon Slim on harmonica (the latter also on vocals), Doug McLeod on guitar, Rick Steff on piano, Alice Hasan on violin, Carl Caspersen on bass, Tom Leonardo on drums and John Whittemore on vibraphone .

The result is a relaxed album where acoustic blues takes over the approximately fifty minutes of elegant and well-developed music and in which Kolassa’s sometimes harsh but always suggestive and well-tuned voice reels off incredible stories including in each and every one of the songs on the album. Good ‘unplugged’ blues by a more than remarkable ‘storyteller’ named Mike Kolassa. ~ La Hora del Blues

Blues man Mick Kolassa has certainly kept busy, releasing three albums in the last eleven months. The latest, They Call Me Uncle Mick!, contains a combination of original material and good choices of covers. The music here is acoustic blues. As is mentioned in the album’s liner notes, “No amplified instruments were used on any track, making this album purely acoustic.” Oh yes, acoustic and so damn good! Some talented musicians join him on this album, including three harmonica greats – Eric Hughes, Watermelon Slim and Bobby Rush. Jeff Jensen is on guitar and percussion, Tom Leonardo is on drums, Carl Caspersen is on bass, Rick Steff is on piano, and Alice Hasan is on violin. There are some other guests on various tracks. ~ MORE >>