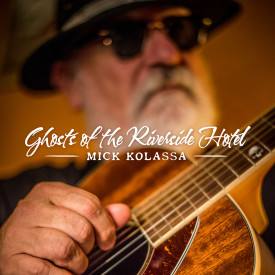 Mick Kolassa could work up an arrangement and sing the phone book (from a small Mississippi town), and make it i hit.  This cat has a certain charisma.  His reworking of Hank Williams’ “Ramblin’ Man” is a classic example.  Backed by a solid band consisting of Jeff Jensen on lead guitar, Bill Ruffino on bass, Robinson Bridgeforth on drums and Chris Stephenson on organ, he blows through a dozen tunes, eight of which are his own originals, like a category five hurricane.  The exception here is that instead of devastation, he leaves joy, healing and a lot of happy fans in his wake.  A long-term blues fan, who also happens to be on the Board of Directors of the Blues Foundation, Mick not only writes blues and plays blues, he sees blues where many might not, as shown in this, his second album.  Add to his kick-ass band a virtual “who’s who” of the blues as “very special guests” who add those special touches that only they can, and you have what might be considered a modern masterpiece.  A “package deal” of sorts, Mick has the look and a voice that sounds as if he was raised in a smoke-filled room with his vocal chords soaked in bourbon.  Any question as to his love for the music is dispelled from the opening notes of the first track.  There is another one of those albums that makes me feel better about the state of the Blues as a whole.  Another tune that caught my ear was cut number 3, “One Meatball”, a tune I first heard done by Josh White, then, more recently by Ann Rabson.  Randy Newman’s “Mama Told Me Not to Come”, not normally considered a Blues tune, is another of my favorites on the album.  Between Mick and Jeff Jensen, who shared responsibility for the arrangements, they did wondrous things.  Then, there are the Kolassa originals.  Each could easily, with the exception of the contemporary references, have been written by one of the long past masters.  All I say is that this band is tight, hot and right on the money and Mick Kolassa is in a field of his own.  This one is entertaining, educational, exceptionally funny and one of those things you could put in the player and let run for the day.  I recommend buying several copies.  This is something you are going to want to share with friends and family.  It honestly doesn’t get any better than this.

Bill Wilson
As published in Reflections In Blue – August 2015