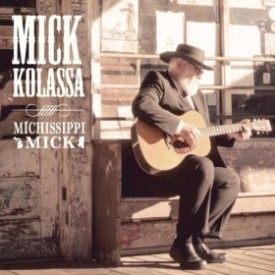 New Artist – New Album – Great Cause. Michissippi Mick is Mick Kolassa, a lifelong musician and hardcore blues fan. He’s also on the Board of Directors of the Blues Foundation and he is donating 100% of the gross sales of this album to the Hart Fund and Generation Blues – two very important programs of The Blues Foundation. To learn more about those programs, and the organization as well, just click the links. Thanks Mick!

For the last fifteen years I’ve been going to Memphis at least once, and sometimes twice a year, and not one of those times have I ever not seen Mick Kolassa hanging out on Beale Street supporting the local musicians and the venues that hire them. It wouldn’t surprise me if they make him the first moving Blues Trail Marker because you can bet that wherever Mick is going, the blues are going on.

As a matter of fact on “Michissippi Mick” – his debut CD – many of those musicians he follows are now his band mates. As fitting as that is, it’s also an intelligent move on Mick’s part as well. After all, every good musician knows that in order to be better you surround yourself with the best musicians. In doing so, Mick’s hit a home run on his first at bat.

In addition to Mick writing eight of the disc’s tracks, his and Jeff’s creativity give the four covers quite a renewed sound.

The disc opens with “New Beale Street Blues” and it’s about some of the goings on that take place on one of the most famous streets in America. According to Mick, “If Beale Street could talk, married men would have to pack their bags and walk.” Sounds to me like what happens on Beale Street should stay on Beale Street. This one’s front porch, Delta style blues with good pickin’, strummin’, drummin’ and blowin’ by Mick, Doug and Eric.

You could probably search the bios of every blues man, woman or band and I doubt you’d ever see The Box Tops listed as an influence. Furthermore, whoda thunk anyone would ever turn their hit song “The Letter” into a Gospel style, Delta blues song? Well, Mick did and I’m loving it. This slow blues version of the song features soulful and heartfelt vocals by Mick, heavenly sounding organ chords by Chris, and angelic sounding backup vocals by Reba. This rendition of this track defines the phrase “making it your own”. Great job!

With no pun intended, “Burned That Bridge” is one of the disc’s smokers. In the middle of the track there’s a short one minute instrumental segment that’s killer. It starts out with Victor breaking out into a killer piano lead then Bill, Doug and Chris quickly passing the lead from bass, to drums, to organ with Brandon closing it out on a monster harp lead. As good as Mick and Reba were on the vocals, I would have loved another five more minutes of that. Another great track.

“Baby’s Got Another Lover” is well over seven minutes of slow and low down blues and whenever you give me that much time of this kind of blues it automatically becomes one of my favorites. This one features the nucleus of the band with Bill, Doug and Chris in a lazy, laid back rhythm groove, Mick softly and slowly singing the blues with feelings and Jeff mastering his guitar from those piercing one note picks to those long blistering riffs. Great stuff.

This one’s called “WPD” and it’s the abbreviation for something that Mick hates to see….White People Dance. He admits that “it’s not right to be bad mouthing his own peeps, but he can’t help it ’cause watching just gives him the creeps”. The lyrics to this one are hilarious with one line making me laugh more that the last. Ironically, it’s musically a great dance number. I’m betting it took a lot of takes to get this one recorded.

With a light rhythm behind him “Mississippi River Blues” is pretty much all Mick. It’s a short acoustic track that features some great guitar pickin’ and some of his best vocals.

Other tracks on “Michissippi Mick” include “Blues Are All Around Me”, “Reefer Man”, “Blues In The Night”, “Land Of The Crossroads”, “Blowtorch Love” and “Time Ain’t On My Side”.

Think about this. How cool would it be if a member of the Board of Directors of the Blues Foundation puts out a CD with the purpose of raising money for the organizations projects and it garners him a “Best New Artist Debut” nomination? I’m just sayin’.

Please go to www.mimsmick.com to find out more about “Michissippi Mick” – the CD – and Michissippi Mick – the man as well. Be sure to tell him his Buddy the Blewzzman sent you, please.