CD Reviews – For the Feral Heart 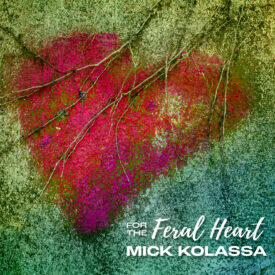 TRANSLATION: Mick Kolassa is a busy bee. The long player ‘For The Feral Heart’ is already the successor to ‘They Call Me Uncle Mick!, which was released in the summer of 2022. It is his third album that will be released this year and every album has been given a theme. Now these are apparent love songs, but fortunately there is more than just love songs musically. Mick opens with the blues rocker ‘Running To You’, to continue his way with the jazzy ‘Elegant Angel’. The track ‘Feeling Alright’ with Dave Mason’s credits is a wonderful guitar duel between Mick and Jeff Jensen. Guitarist Mario Monterosso comes into the spotlight in ‘Love Ain’t Supposed To Make You Cry’, it’s almost a trademark song for Kolassa. The jazzy and blues song ‘Easy To Love’ is alternated by the acoustic ‘I Keep Looking’. The ballad ‘I Left My Heart In Birmingham’ is about a ‘long-distance’ affair ‘Love In My Size’ and that contrasts with the reggae tinged ‘Forever Sometimes’ and ‘Hold On’, with its distinctive syncopated calypso groove. Alice Hasen’s violin arrangements magically color the roots related ‘Run Away With Me’. Herman Hupfeld’s old standard ‘As Time Goes By’ is the ideal bouncer.

Michigan native Mick Kolassa has lived in Clarksdale, Mississippi for over twenty-five years. He is therefore no stranger to the local blues scene in and around Memphis and was a former member of the Board of Directors of The Blues Foundation. After years of songwriting, Mick Kolassa decided to record his debut album and embraced his friend Jeff Jensen as producer. In 2014 this resulted in the success story ‘Michissippi Mick’. All net proceeds were donated to The Blues Foundation. So Kolassa has its heart in the right place. ~ Keys and Chords

Mick Kolassa is a most prolific musician and manages to make all of his albums compelling listening, venturing into different genres at times, but remaining firmly rooted in the blues. His latest release, For The Feral Heart (Endless Blues Records), is his third album from 2022 and consists of nothing but love songs, ten originals from Kolassa and two interesting covers.

The opener, “Running To You,” is a lively blues rocker, followed by “Elegant Angel,” a jazzy blues and one of two tracks featuring Memphis guitarist Mario Monterosso. The album’s first cover is Dave Mason’s “Feeling Alright,” and Kolassa gives this track a somewhat slower pace than usual, bringing out the often-overlooked lyrics (addressing divorce).

“Love Ain’t Supposed To Make You Cry” is a slow burning blues featuring Monterosso on guitar once again, and “Easy To Love” is a smoky urban blues. “I Keep Looking” is a gentle, mostly acoustic tune.

“I Left My Heart In Birmingham” is a rootsy ballad about the complications involved with a long-distance love affair, featuring Alice Hasen on violin, “Love In My Size,” a song about an unlikely love affair, continuing in the same musical vein.

“Forever Sometimes” and “Hold On” touch on reggae and calypso respectively, and “Run Away With Me” is a bittersweet song about our wishes that sometimes go unfulfilled. Hasen’s violin is a wonderful complement to the poignant lyrics.

Kolassa wraps up the album with his take on one of the greatest love songs ever, “As Time Goes By,” from Casablanca.

As with all of Mick Kolassa’s albums, all net proceeds from For The Feral Heart will go the Blues Foundation, split between the HART Fund and Generation Blues. This is a fine album of warmth and compassion that goes down smoothly.The latest in a set of great albums from Mr. Kolassa. ~ Graham Clarke, Blues Bytes

Mick Kolassa’s pace is certainly not slowing. In August, he released an excellent album titled They Call Me Uncle Mick! and followed that just a few months later with For The Feral Heart. And this latest release contains mostly original material. As the title and the album’s cover suggest, the tracks on this album deal with love. And is there anything more important? I think the pandemic has made most people take a new look at their priorities, and, big surprise, Love has once again come out on top. Mick Kolassa, in addition to the vocals, plays acoustic guitar and electric guitar on this album. Joining him on this release are Jeff Jensen on guitar, Bill Ruffino on bass, Rick Steff on keyboards, Tom Leonardo on drums, and Andrew McNeil on drums, along with some guests on certain tracks. By the way, all net proceeds from sales of this album go to The Blues Foundation, and specifically to the HART (Handy Artists Relief Trust) Fund and Generation Blues. MORE->