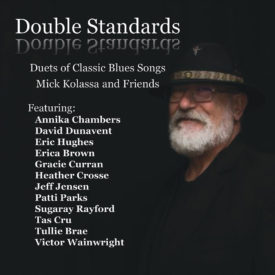 The reviews are coming in on the February 2018 release Double Standards!

Mississippi-based guitarist and vocalist Mick Kolassa gathers a bunch of his friends for duets in this set of blues standards. Blues is often rowdy and raucous but here Kolassa and friends demonstrate how the idiom can be played with finesse and class… MORE

Mick Kolassa is a very likable guy and therefore as a musician he has acquired a lot of talented friends. When he decided to do an album of duets of blues standards to be called Double Standards, of course, he collected 12 of them to sing with him…MORE

Double Standards is a simple concept: singer Mick Kolassa duets on blues standards with talented colleagues. The result is a deceptively complex album of compelling takes on great blues songs, with Kolassa’s raspy tone surprising the listener with a jazzy delivery…MORE

Over the last few years, bluesman Mick Kolassa has become one of our favorite performers.  Never afraid to express what’s on his mind, that attitude carries over into his music, and it always leads to some fresh, old-school, down-home blues…MORE

Last year, Mick Kolassa and Mark Telesca released You Can’t Do That!, an album of blues renditions of Beatles songs. Now Mick Kolassa is teaming up with several vocalists on his new release, Double Standards, a collection of covers of well-known blues tunes…MORE